Cables usually refer to two or more wires that are bonded or twisted together to carry electric current. Audio visual cables are those that transmit both audio and video signals.

HDMI (High Definition Multimedia Interface): It is a compact audio visual interface to transfer uncompressed video and compressed/uncompressed audio data. It implements ‘EIA/CEA-861’ standards, which define specific video formats and wave forms to transfer compressed and non compressed audio and auxiliary data.  These cables were designed in 2002 and have been in use since 2003.

RCA Connector: RCA cable is often colour-coded: yellow for the composite video, red for the right channel, and white or black for the left channel of stereo audio. This type of cable is usually an RF coaxial designed in early 1940s, and is used to carry audio and visual signals.  That’s why sometimes; it’s also referred to as "A/V" jacks. It is used as a power connector, an RF connector and also as a connector for loud speakers. 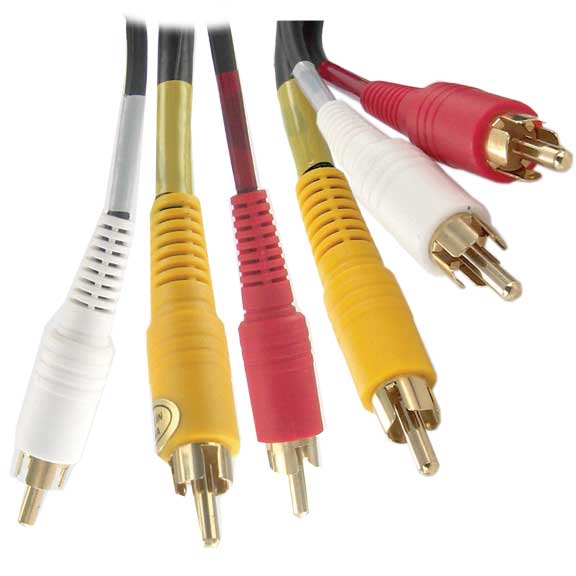 Coaxial Cable: This cable that has an inner conductor and it is surrounded by an insulating tubular layer that has a tubular conducting shield.  Its design was patented in 1880.The dimensions of the cable are customised to give a specific continuous conductor layer which enables it to function precisely as a ‘radio frequency’ transmission medium.

Cable Modem: It is a type of Network Bridge that gives bidirectional data transmission via radio frequency channels. They are used to deliver broad band internet access due to the range of high band width of hybrid fiber coaxial channel (HFC) and (RFOG) networks.

SCART: It is an associated 21 pin connector for connecting AV equipments. The official standard for SCART is CENELEC and is sometimes referred to as the IEC 9331-1 standard. It is designed to carry analog standard definition content. Generally, it carries composite and ROB video, stereo, audio and digital signals.

F Connector: It was designed in the early 1950s and is used for terrestrial and satellite televisions.  Especially for television antennae, it has an impedance match of 75 Ohms and a band width of up to several GHz. It is best used for domestic terrestrial cables anterior.

XLR Connector: This connector is mainly used for stage lighting equipment; specifically for digital audio and lighting control for low voltage supplies. The connector is circular and has 3 to 7 pins. Such connectors are available in two types: male and female connectors.

HDMI Cable: It is used in store labelling specifications for HD TV sets. It can transfer Dolby Digital plus, Dolby True HD and DTSHD master audio that are in compressed form. HDMI 1.0 transfers blue ray disks at full video quality.

RCA Connector Cable: It allows transmission of one cable at a time but its problem is that each signal requires its own plug. This leads to a mess of cables. Another problem is that the inner signal is made before the ground signal and this produces a loud noise which may distort other equipments.

Coaxial Cable: It is used for transmitting lower frequency signals and connecting radio transmitters and receivers to the antennas. It has an advantage over other conductors owing to its electro-magnetic nature. It can therefore transmit signals with little interference and negligible loss of power.

To conclude, depending on the exact use, one should select between HDMI cables, coaxial cables and cable modem as they are more advanced in signal transmission and involve less loss of power.